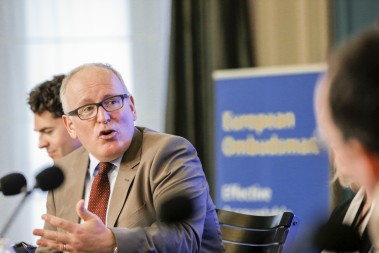 Will Timmermans really shed light on lobbying in Brussels?

Commission vice-president Frans Timmermans’ launch in March of a consultation to improve the EU lobby register came seven months late. Does it herald a genuine step forward towards improved lobby transparency in Brussels?

A database of organisations working to influence EU legislation, the European transparency register was designed to boost the image and integrity of the institutions.

The commission’s latest moves to reassess the tool are welcome, however campaigners and veterans of such processes would be forgiven for being a little weary at the thought of yet another review of the lobby register.

The Alliance for Lobbying Transparency and Ethics Regulation (ALTER-EU) was there in 2008 when the first register was set up, and again in 2011 when the commission’s register was merged with that of the European Parliament, and most recently we saw minor changes introduced in 2013-14.

Progress was made during this time to shed more light on lobbying at the EU level, but it has been glacially slow. And fundamental problems remain.

ALTER-EU has consistently argued for a legally-binding lobby transparency register which enables citizens to see who is influencing EU decision-making, on which issues, on whose behalf, and with what budgets. Now Timmermans promises a mandatory lobby register.

In theory this sounds good but, as ever, the devil will be in the detail. At the end of this consultation and review process, for the vice-president to hail it as a success he must be able to answer the following questions accurately.

Who is the top lobby spender? According to the current transparency register, it is APETRA spending €95,000,000 on EU lobbying annually. This is implausible for an organisation whose mission is to manage oil stocks for Belgium. Eliminating the huge problem of dodgy data in the register might instead see the European Chemical Industry Council (CEFIC) as the most likely organisation at the top of the biggest spending list, based on current declarations, with €10.1 million.

Which group has the most lobbyists working on its behalf? Apparently it is the Vereniging Landelijke Organisatie Dibevo, which declares the equivalent of 7,000 full-time lobbyists on a lobby budget no greater than €199,999. This Dutch organisation claims to “stand up for the interests of the entire pet food industry in general and its members in particular”. That may be, but it remains highly unlikely that it can really boast of 7,000 active EU lobbyists. This is one of many ludicrous entries in the lobby register as the LobbyFacts list of organisations declaring the most lobbyists makes clear.

Which is the biggest-spending lobby consultancy? The register says its Scytl – Secure Electronic Voting, spending €45,122,748. In fact a list of the biggest lobby firms operating at the EU level which has been cleaned of obviously dodgy entries implies that Fleishman-Hillard is the biggest EU lobby firm, which is a far more plausible answer, with its Brussels office, scores of clients and 48 European Parliamentary access pass holders.

What lobby activities are being performed by the 200 plus organisations posting a zero or otherwise minuscule annual lobby spend? In our view, organisations which do not have any lobby costs in one year are clearly not active EU lobbyists and thus should not be in the lobby register at all.

How many unregistered lobbyists are still able to lobby the EU institutions? The answer should be none, and Timmermans recently said that the ban on top commission officials meeting unregistered lobbyists made the register de facto mandatory. Yet we know that the bank JP Morgan, the lobby firm EUTOP, and law firm Gibson, Dunn & Crutcher LLP and many, many others have held discussions with commission officials but are nowhere to be found on the register.

The present dismal state of the lobby register makes adequately answering these basic questions about lobbying in Brussels impossible. This new review process must not merely tinker at the edges of the EU’s transparency regime. It should not only look at the overall quantity of registrations, but especially at the quality of the data too.

The commission should not use the word mandatory to describe the result, unless it is backed by law (or other equally strong features that make access to decision-making by unregistered lobbyists impossible) and has effective sanctions.

Only then can there be any hope that the register will reflect all active EU lobbyists and contain solidly reliable data.

ALTER-EU is a coalition of over 200 public interest groups and trade unions concerned with the increasing influence exerted by corporate lobbyists on the political agenda in Europe.