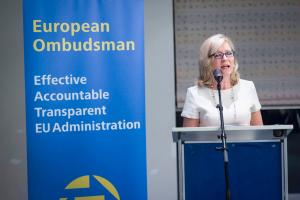 Annual Report of the European Ombudsman on transparency

Alleged lack of transparency continued to be the top issue brought to the attention of the European Ombudsman, accounting for 22.4% of complaints in 2015. Such cases concern, for example, the institutions’ refusal to grant access to documents or information.

These successive steps represent major progress as regards transparency of trade negotiations. The Commission’s moves were not in response solely to the work of the Ombudsman. Many actors – from civil society to Members of the European Parliament – had expressed concern. But in opening an inquiry, the Ombudsman was able to channel many of these concerns and help achieve a tangible outcome by making specific proposals to the Commission.

Another institution that made significant progress towards becoming more transparent in 2015 was the European Central Bank (ECB). The Ombudsman wrote to the ECB President, Mario Draghi, in May to ask for clarifications surrounding an incident in which potentially market-sensitive information appeared to have been disclosed to a limited audience. President Draghi replied that the Ombudsman’s letter had prompted the ECB to think about further steps to improve the transparency of its communication channels. In October, the ECB published new guiding principles for speaking engagements, specifying that no market-sensitive information should be divulged at non-public events or during bilateral meetings. It also established a “quiet period” whereby speeches and public remarks, given seven days prior to Governing Council meetings, should not influence expectations about forthcoming monetary policy decisions.

At the end of October, the Bank announced that from spring 2016 it would, with a three-month lag, start publishing a list of meetings of its Executive Board members. In December, it built on these steps by announcing it would extend the “quiet period” so that Executive Board members should not meet or talk to the media, market participants or other outside interests on monetary policy matters in the week leading up to Governing Council meetings. The Ombudsman welcomed these moves, noting that the immense responsibility vested in the ECB means it is all the more important that it strives to have the highest standards of governance.

With EU legislation affecting virtually every aspect of citizens’ lives, it is essential that law-making be fully accountable to the public.

This was part of the rationale behind the European Ombudsman’s decision to open an investigation into the transparency of ‘trilogues’ in May 2015. Trilogues are informal negotiations between the European Parliament, the Council, and the Commission, aimed at reaching final agreements on new EU legislation. In the EU’s co-decision procedure, Parliament and Council must jointly adopt legislative proposals submitted by the Commission. While the procedure can entail up to three readings, the increased use of trilogues has meant that around 80% of EU laws are now agreed at first reading.

Several actors – including Members of the European Parliament, national parliamentarians, civil society organisations and businesses – had expressed concern that efficiency gains made by the trilogue process may come at the expense of transparency.

On opening her investigation, the Ombudsman sent letters to the President of the Commission, the President of the Parliament and the Secretary-General of the Council noting that trilogues are increasingly heralded as the place where the negotiated content of the final legislation text is decided upon. The Ombudsman asked a series of questions notably about the proactive publishing of trilogue documents. She also informed the three institutions that, as part of the investigation, she would like to inspect the trilogue files for two recently adopted pieces of legislation (the Clinical Trials Regulation and the Mortgage Credit Directive). These two laws were chosen because they concern matters of wide public interest.

A conference examining trilogue transparency, organised by the Ombudsman’s office in September, was attended by more than 250 MEPs, interest representatives, journalists, academics, and others. Participants discussed the merits of making the trilogue process more open, including whether it is necessary to publish the timetables and agendas for such meetings.

n December, having received the institutions’ opinions on trilogue transparency and having conducted file inspections, the Ombudsman’s office launched a public consultation. The consultation seeks the opinion of individuals, NGOs, business associations and other organisations on a series of questions including on whether the trilogue process is sufficiently transparent and how increased transparency might affect the legislative process. The results of the public consultation, as well as the inspection of trilogue files and the opinions from each of the three institutions, will feed into the Ombudsman’s overall assessment of what steps can be taken to make trilogues more transparent.

Transparency also involves public administrations being open about the reasoning behind decision-making. This was at the core of a complaint made by a German citizen to the Ombudsman. He accused the Commission of not properly explaining why it was not investigating his infringement complaint in which he alleged Germany was not correctly implementing the E-Privacy Directive. The Ombudsman issued a critical remark as she found that the Commission had not provided sufficient reasoning about why it was not taking action on two of the issues – how Germany stored and processed data as well as its e-marketing rules – raised by the complainant.

Policy-makers often need expert input when preparing legislative proposals. The Commission currently has more than 800 expert groups which advise it on policy. However, the composition of these groups, and the limited public access to how these groups do their work, have attracted criticism. The Ombudsman in 2014 opened an investigation into the make-up and transparency of these groups. Contributions to the subsequent public consultation helped shape the Ombudsman’s suggestions for improvement. The Commission responded in May 2015, saying it had agreed a new conflict of interest policy for experts appointed in a personal capacity. It also said the selection procedure for experts would be more transparent and pledged to revise its expert groups register. The Ombudsman said these steps were encouraging but that the Commission still needs to do more to open up the groups to public scrutiny. In a recommendation, she called on the Commission to publish comprehensive minutes of expert group meetings.

Lobbying in Brussels was also the subject of a high-level discussion entitled “Is Brussels the new Washington, D.C.?” organised by the Ombudsman in May 2015 and including Commission Vice-President Frans Timmermans as a speaker. In her opening address, the Ombudsman underlined the importance of EU institutions having robust procedures in place to ensure that their Members and officials are aware of how influence is brought to bear.

How lobbyists exert influence was at the centre of an inquiry concerning representatives of the tobacco industry in which the Ombudsman found that the Barroso Commission – with the exception of DG Health – was not being transparent enough about tobacco lobbying and therefore not fully implementing UN rules and guidelines in this area. The Ombudsman called on the Commission proactively to publish online all meetings with tobacco lobbyists, or their legal representatives, as well as the minutes of those meetings. In its opinion on the Ombudsman’s recommendation, the Commission said it is already meeting its obligations under the World Health Organization’s Framework Convention on Tobacco Control (FCTC). The Ombudsman said she strongly regrets the stance, noting that public health demands the highest standard.